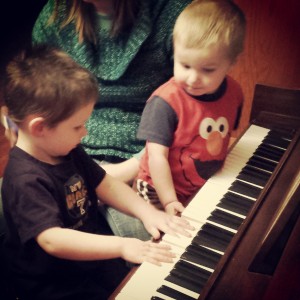 Two of my favorite comforts after surgery.

So about my surgery…

I had every girl’s favorite doctor appointment at the end of October.  I’ve been having a lot of on-again-off-again cramping since Cricket was born, and Thumper’s arrival only made it worse.  Intimacy has been difficult, to say the least.  When I went to the doctor, they did an ultrasound and found that I had a cyst on my right ovary.  My doctor wanted to keep an eye on it, so I scheduled a follow-up appointment in early December.  That ultrasound showed no cysts.  Yay!

But then a couple days after Christmas, I started cramping again, and it was worse than ever.  I was dizzy from the pain, and sweaty and queasy to boot.  I tried walking, I tried lying still, but nothing eased the pain.  The only reason I got any sleep that night was because I took some Tylenol PM.  I cramped all through the night and most of the next day, then I was sore for two days afterward.  It was miserable.

I managed to get an appointment with my doctor the Monday after Christmas, hoping he would be able to do something about the pain.  A third ultrasound revealed two 5 cm cysts on my left ovary that hadn’t been there a few weeks prior.

Discussion followed, and I have never seen a doctor look quite so confounded.  Despite the risks, decided it was probably best to get in there and find out what was going on (or at least take care of the cysts).  Surgery was scheduled for the seventh, and then my insurance company completely dropped the ball.  Apparently, their standard review procedure takes two weeks, but my surgery was scheduled one week ahead of time.  No one from my insurance company relayed that information to my doctor’s office, so by the time they found out about it and enacted the expedition procedure, it was too late.  My insurance company didn’t approve the procedure till the day after it was supposed to take place, so I had to reschedule it.

If you’ve ever tried to line up early morning daycare for four kids, you’ll feel my pain.  It wasn’t just my schedule that was screwed up; my mother-in-law’s was as well, since she was coming up to look after the kids.

The operation was supposed to take an hour.  The plan was to remove the cysts on my left ovary in addition to as much scar tissue from repeated cesareans as possible.  But when they got in there, they found another cyst on my right ovary that hadn’t been present during my last ultrasound.  When they tried to drain the cysts, I started bleeding and they were forced to take out both ovaries (as well as both fallopian tubes).

I’d resigned myself to the possibility of losing one ovary, because my doctor had warned me that it was a risk, but I hadn’t expected to lose both of them.

The day before surgery, we had an open house and a piano recital.  As I was running around like a chicken with my head cut off trying to straighten things up last-minute, Murphy’s Law kicked in (we were late to the recital because my mother-in-law had blocked me in and got stuck trying to unblock me, so naturally, Miss Tadpole played first and we missed half of it) and I made the remark that at the rate things were going, I’d be in menopause by that time the next day.

Apparently I should have kept my big mouth shut.

I’ve been trying not to think about it.  I fail at not thinking about it.  And yet despite all the not not-thinking-about-it I’ve been doing for the last week, I don’t think it’s truly hit me what happened yet.  I haven’t really dealt with it.  I mean, I’m not even thirty yet (till tomorrow, anyway) and I’m in menopause already?  This shouldn’t be happening, but it is.  Right now, I’m just taking it one hot flash at a time and wishing to God that I didn’t have to.

But if wishes were horses, then beggars could ride.

My now-defunct ovaries were promptly sent off for testing last week and, despite the fact that the results from said testing were only supposed to take three to five business days to return, I had heard nothing from my doctor concerning those results.  So I called them yesterday.  Turns out they hadn’t yet received the full pathology report.  However, they were able to tell me that I DO NOT HAVE CANCER!

Let me repeat: I DO NOT HAVE CANCER!

I don’t know when I’ve been so excited to receive a phone call from a doctor’s office.  This was a HUGE load off my mind, as my grandmother died of ovarian cancer just over a decade ago.  I’ll get the full report next week at my post-op appointment, but for right now, I’m happy with this news.  To recap: no more ovaries, no more cysts, and no cancer.

Yesterday was a damn good day.  Best Monday ever, in fact.

28 thoughts on “Best Monday ever”