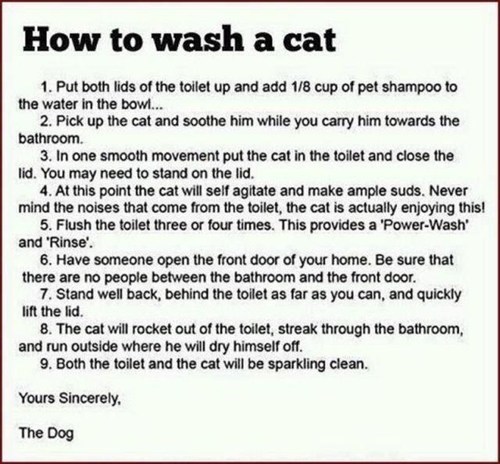 And now, a change of pace.  I spent my weekend taking care of two sick guys, and Monday night was little different.  But Monday night was when we discovered that sick toddlers are a lot like cats, and if you read on, you’ll find out why.

Cricket came home from daycare Friday night feeling pretty rough.  Thirty-six hours of feverish cuddles had him on the mend, but by Saturday night, he’d managed to share the mystery fever with Thumper.

Time and Tylenol seemed to do the trick, but by the time Monday night rolled around, his temperature had soared to 103.7°F.  Another dose of Tylenol went down well (they both love their medicine – Cricket even asked for seconds *facepalm*), but he was so hot that Miss Tadpole stripped him down to his diaper in hopes it would help him feel better.

Thumper the Hollow-Leg Boy refused food and instead spent supper curled up on my lap whimpering in misery.  (I wish I were joking about the hollow leg, but he and Cricket can out-eat their ten-year-old brother.  I think I’m going to have to farm one of them out to the neighbors in order to pay for the groceries in a couple years when Bubbles hits his teenage growth spurt.)  This made eating my sandwich difficult, as tuna salad sandwiches have an annoying tendency to fall apart if not held with two hands and Thumper kept stealing my left hand and wrapping it around himself for comfort.

Supper time was followed by a bath time.  A nice, lukewarm bath designed to help cool him off a bit.  Normally, Thumper loves bath time, but not, apparently, when he’s sick.  He wanted no part of this bath; he just wanted to curl up on my lap and be miserable.  If his temperature hadn’t been so high, we might not have pushed it, but we did.    The Tylenol didn’t seem to be cutting it, so into the tub he went.

I managed to get Thumper sat down in the tub while Seymour filled a small cup with bath water.  I kept my hands on his arms as Seymour poured the water down his back…and watched in amused horror as my sick little guy turned feline.  Limbs flailed, water sprayed, the roar was deafening…You’d have thought we were bathing a cat instead of a two-year-old.

Seymour doused him with baby shampoo and I scrubbed him from head to toe.  We dug out one of the boys’ toy boats for him to play with, but he wasn’t overly interested in it.  Then we dug out some rubber alligators, but they didn’t go over well, either, despite the fact that one of them was a squirt gun of sorts.  By the time he finally calmed down, it was time to rinse.  When Seymour poured the next cup of water down Thumper’s back, his legs sprang out as if jet-propelled and hit the opposite side of the tub.  Apparently unimpressed with his first attempt to share the bath time love, he put up such a fight during rinse time that our bath tub resembled a small fountain.

When it was all over, he just sat there glaring at us and whimpering.  Thinking he was probably ready to be done with the whole bath thing, I asked if he was ready to get out of the tub.

“So you want to stay in the tub?” Seymour asked.

My adoring husband picked up the squirt gun alligator.  “Do you want me to squirt Mommy?”

It was the most pathetic “yes” I’ve ever heard.  It was very hard not to laugh.

But, despite its resemblance to medieval torture, that bath did the trick.  Thumper’s temperature sank like a rock and when he woke up the next morning, he asked for cereal before anything else.  I’ll miss the cuddles, but I’m happy to have my little perpetual motion machine ship shape once more.