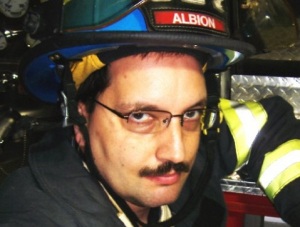 Today, I’m happy to have Mark R. Hunter here to talk a little about his newest book, The No-Campfire Girls.  A fellow member of the Ink Slingers League, he’s a pretty funny guy with a pretty insightful take on that most dreaded of questions posed to writers: “Where do you get your inspiration?”

Take it away, Mark!

Sometimes I’ll finish a manuscript, look back over the story, and think: “Where the heck did this come from?”

On the other hand, sometimes it’s pretty clear where I got my story idea.

Storm Chaser? “Hey, I think I’ll write a story about a storm chaser.” Of course, after the initial idea things went wildly out of control, starting with the fact that my storm chaser became, technically, a disaster photographer. But Disaster Photographer didn’t have quite the same ring to it.

Okay, maybe I do know where most of my ideas come from. The newest book, The No-Campfire Girls, can be traced easily to its source, which was an attempt by the Girl Scouts to shut down my wife’s beloved childhood camp.

I don’t use the word beloved lightly.

And she’s not the only one: A grass roots campaign sprung up, probably from the roots, of people across the area who wanted to save their camp. My wife and I came back from a visit determined to find a way to help them.

The problem: Camp Latonka is in southeast Missouri, and we now live in northeast Indiana. That’s a nine hour trip even if they did want my help with repair, cleanup and maintenance, which (if they’ve read my columns at all) nobody does. How could we help?

Well, there’s one thing I do well.

By the time we left Missouri I’d crafted the original idea for a short story, with part of the proceeds going to help the group Friends Of Camp Latonka. The name is self-explanatory.

The short story became a novella, and a long novella at that, for two reasons: First, we wanted something that was long enough to be printed in book form, in addition to being sold as an e-book. Second, I’m really long winded.

So the 5,000 word short story turned into a 30,000 word long novella, with 10,000 words of that going to the Save Camp Latonka effort. Another 10,000 words or so will go toward publicity, distribution, and the cost of driving  back and forth as the Scouts and their supporters continue to make improvements and drum up still more support.

Wait, does that mean I can write the mileage off on my taxes?

That was just the easy part, of course. In later posts I’ll cover character development, and how I cheated on it, as well as other things such as the best snacks for writers. (Hint: chocolate.)

And the plotting? My wife and I talked the plot through for 500 miles. We knew it was going to be set at a camp and that it would be part action/adventure, part humor. We knew the girls at that camp (not a Girl Scout camp, because—legalities.) would face some kind of challenge, and would face it together, and that hijinks would ensue. Hijinks are very important.

So … what if there was a drought? And what if one of the things our main character loved about camping was the big bonfire, not to mention all the little campfires along the way? And suppose there was a burn ban that was bringing down morale in the whole camp?

Well, what if my main character was the type who took action, rather than sitting around complaining? What if she (remember: girl’s camp) decided they just had to make it rain?

The possibilities narrow somewhat at that point, because there are only so many ways to water a summer camp, so soon I had what we professional writers like to call a story. More importantly, I had fun, original, memorable characters.

And if they aren’t, you can blame the writer I stole them from.

For two decades Mark R Hunter has been an emergency dispatcher for the Noble County Sheriff Department. He’s served over 32 years as a volunteer for the Albion Fire Department, holding such positions as safety officer, training officer, secretary, and public information officer. He also has done public relations writing for the Noble County Relay For Life, among other organizations, and served two terms on the Albion Town Council. When asked if he has any free time, he laughs hysterically.

Mark lives in Albion, Indiana, with his wife and editor Emily, a cowardly ball python named Lucius, and a loving, scary dog named Beowulf. He has two daughters and twin grandsons, and so naturally is considering writing a children’s book. He can be found online at www.markrhunter.com.

Fifteen year old Beth Hamlin is horrified to discover her beloved summer camp must go without campfires this year, due to the fire hazard from a drought. At first she and her friends try to perk up the other campers, but Beth isn’t one to just sit (or swim, or boat, or horseback) around, when there’s a challenge to be met. Beth discovers her new cabinmate, Cassidy, knows a local Cherokee who claims the ability to do a rain dance. Now all they have to do is trick the Camp Director into letting Running Creek do the dance there, avoid the local bully and a flying arrow or two … and keep from getting caught plotting with the local fire captain on a forbidden cell phone. With luck southern Indiana will get a nice, soaking rain, and when it’s over Camp Inipi can have proper campfires again. But when things go horribly wrong, the whole area is endangered by a double disaster. Now Beth, Cassidy, and the rest of their unit may be the only people who can save not only their camp, but everyone in it. When Beth’s big brother told her being a teenager could be rough … he probably didn’t have this in mind. *A portion of the proceeds of this book will benefit Friends of Latonka, an organization made to save a summer camp in Wappapello, Missouri, until the fundraising deadline.*

You can find The No-Campfire Girls on Amazon and Amazon UK.

8 thoughts on “No campfire? The horror!”