Self portrait courtesy of the movie Inside Out.

According to Facebook’s “On This Day…” feature,  I was having a Leopold Bloom moment on this day back in 2007, and you know what? I kinda want my blue blanket right now, and I don’t even have one.

Well, not a blue one. I do have a striped blanket, though, and it makes an excellent shawl. Why didn’t I grab it on my way out of the house this morning?

Oh, right – because I was too busy being hysterical. At least I wasn’t hysterical and wet.

How’s Monday treating you? Will you go trick-or-treating tonight? Let’s look on the bright side of this Monday together!

Welcome to the cover reveal for S. L. Saboviec’s Warring Angel, the third and final book of her Fallen Redemption series. Warring Angel’s cover is by Regina Wamba of Mae I Design, and it just might be the most gorgeous of all three.

And what’s behind that gorgeous cover is END_OF_DOCUMENT_TOKEN_TO_BE_REPLACED 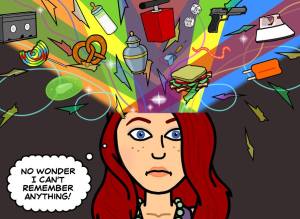 Excuse me, but I’d like to engage in a bit of a brain dump. Here, then, are some things that have inspired me, made me laugh, or just sort of poured out onto the virtual page in the last week or so.

“You trace your lineage back centuries, back to the Puritans of ancient New England, but we can trace it further.”
I’ve been feeling the sci-fi vibe lately, and this struck me as perfect for an aliens-invade-America kind of story. Don’t ask me why. 🙂

“It’s easy to quit on a relationship when the going gets tough; it’s much, much harder to react with grace for those who’ve committed such a grievous offense against one who is supposed to love, honor, and cherish you till death do you part. Forgiveness is not always easy.”
This was in reaction to an open letter to Hillary Clinton. I’m not a fan, but aren’t we tired of hearing about her marital problems by now? (For the record, I’m even less of a Trump fan, and no, I don’t know who I’m going to vote for yet. Trolls be warned: I tolerate no mean-spiritedness here and I’ll disable comments if I have to (but I really don’t want to, because this post is not about politics).)

Everyone thought the world would end in a great, fiery bang. My grandmother thought so, my mother thought so, even I thought so. But we were wrong. The end of the world was anything but.
This came to me this afternoon. This has the makings of a funtastic story. This is all you’re getting on it for now. 😉 😀

Also? I don’t know about you, but now I have “It’s the End of the World As We Know It” stuck in my head on an endless loop.

And finally, here’s a bit of cuteness from my not-so-little Cricket:

Someday I’m gonna name my kid Aaron Furzy because that’s a beautiful name. And if my wife wants to make it something else, then she can do that. -Cricket

How about you – what’s inspired you lately?

It’s release day for The Impending Possession of Scarlet Wakebridge-Rosé! 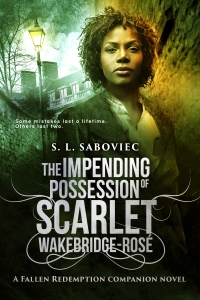 Welcome to the blitz for S. L. Saboviec’s latest release! Just in time for Halloween, pick up this tale of a supernatural menace, strained family ties, and unavoidable destiny:

Scarlet Wakebridge-Rosé, busy executive and less-than-stellar mother and wife, has a problem that only an exorcist can solve. Except she’s not precisely a devout Catholic parishioner any longer, and to gain assistance from the Church means telling a whopping lie of omission.

Fortunately, she discovers Father Angelo Ambrosio, whose commitment to helping the afflicted means he’s willing to overlook the things Scarlet prefers to keep hidden. Unfortunately, his sordid past keeps him under a microscope with the bishop, who’s not so liberal in his views.

But the demon harassing Scarlet is relentless. It makes its motives clear: in a previous life, she struck a bargain, promising it her body on her fiftieth birthday. Now, she and Angelo must unravel the mystery surrounding her forgotten past in order to stop the possession by next week or risk losing her to the depths of Hell forever.

This stand-alone novel set in the Fallen Redemption universe extends the series to modern day. Enter a world where humans reincarnate, demons interfere in daily life, and the currents of fate carry us all to our destinies.

Until the end of release week, The Impending Possession of Scarlet Wakebridge-Rosé is 99 cents through Kindle and free through Kindle Unlimited! Don’t wait – the price goes up to next Monday. 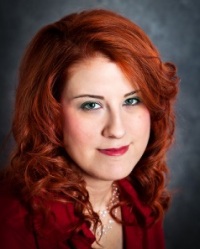 Samantha grew up in a small town in Iowa but became an expat for her Canadian husband, whom she met in the Massive Multi-player Online Role-Playing Game Star Wars: Galaxies (before the NGE, of course). She holds a B.S. in Physics, which qualifies her to B.S. about physics and occasionally do some math for the sci-fi stories she concocts. Her dark, thought-provoking science fiction & fantasy contains flawed, relatable characters and themes that challenge the status quo.

Her short fiction has appeared in AE and Grievous Angel, and her debut novel received an honorable mention in the 23rd Annual Writer’s Digest Self-Published Book Awards.