We spent the day in search of fish, and even managed to catch a few, but the best part of the day was making memories as a family. 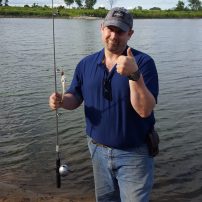 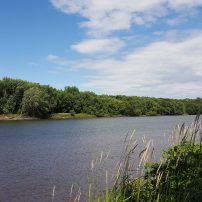 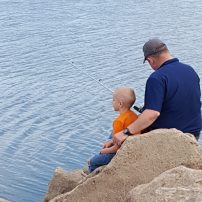 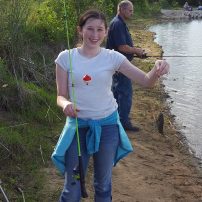 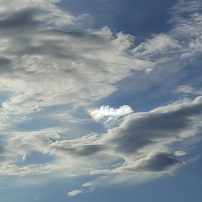 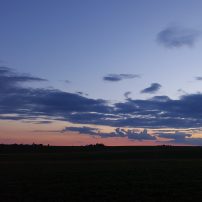 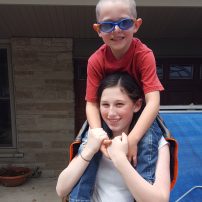 If there’s a better way to spend a beautiful Sunday afternoon than fishing with your family, I’m not sure I want to know it.

How did you spend Father’s Day?

While I was hunting for that video of Thumper reading Little Blue Truck, I found another gem. It’s from the same summer, but before his birthday, and oh, my stars, is it adorable:

I miss those chubby baby cheeks and the innocence in his voice. It’s crazy how much things change, but you don’t really  notice till you see something old like this.

Also, it can’t be possible that he’ll be six in a couple of months. This was just yesterday, I swear.

I’ve been crazy busy the last couple of weeks. Between being swamped at work and having a crazy schedule at home, I feel like I’ve been running around like a chicken with my head cut off.

If you’ve never seen that, let me just tell you – it’s really something.

To say I’ve been frazzled lately would be putting it mildly, and tonight it really hit home just how frazzled I’ve been. And what has all my rushing over the last couple of weeks gotten me? Achy muscles and tension headaches.

I sat down after supper to get some work done on my computer, and Cricket insisted I watch a movie with him. It wasn’t just any movie; it was a movie he’d brought home from school that was full of pictures from his year in kindergarten. Pictures of him and his classmates faded in and out to the sounds of Randy Newman and friends, and I couldn’t help smiling. I’d seen some of the pictures on Facebook, but others were new.

Still, after about five minutes, I started getting antsy. I had things to do, things that wouldn’t get done if I put them off much longer. And somewhere in the middle of “Thank God for Kids” it occurred to me – I need to slow down.

I heard another song then, but this one played only in my head:

I’m in a hurry to get things done,
I rush and rush until life’s no fun.
All I really gotta do is live and die,
But I’m in a hurry and don’t know why.

My Thumper will start kindergarten in only a couple of months, while Miss Tadpole heads off to high school. It seems like just yesterday was her first day of kindergarten, while he wasn’t yet a gleam in our eyes. If I don’t slow down a little bit, I’m going to miss an awful lot.

So in honor of slowing down, here – have a story on me. Thumper loves to read stories, and here he is at three years old, reading Little Blue Truck by Alice Schertle. If you know the story, you may be able to decipher what he’s saying. And if you don’t, well, it’s still awfully cute. 🙂

What kinds of things remind you to stop and smell the roses? 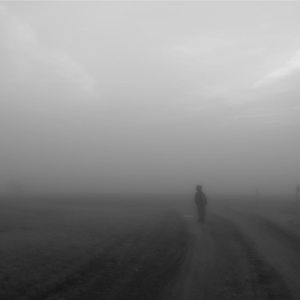 The bell clanged long and loud and low outside her window. Day was done, and with it, her toil. She sat back and stretched, shaking the cramps from her fingers before kneading the knots from her neck and shoulders. The bell’s echo receded into the distance, replaced by the sound of jingling keys, of rusty hinges screeching in protest.

He wasn’t supposed to come till tomorrow. She was supposed to have more time. Maybe if she didn’t turn around, if she refused to acknowledge him, maybe he would leave her. Maybe he would come back tomorrow, like he’d promised.

She wasn’t ready to die. No matter what she’d said.

There's nothing like a piping hot bowl of chili to gird your loins for postseason football. Bring on the buttered saltines! #simplepleasures #comfortfood #fall
Nothing says, "Happy fall, y'all!" like a big bowl of Dinty Moore Beef Stew on a cold and drizzly night. #nostalgia #simplepleasures #comfortfood
Happy last first day of school, Bubbles! From his first day of kindergarten to his first day of twelfth grade, there were a lot of long days and a lot of short years. How it's possible that he'll turn 18 in a few short weeks, I still haven't figured out, but I do know I am exceedingly proud of the young man he's become.
😁😁😁 #STLV
Love those colors. #sweetsummertime #nofilter #outdoors #Iowa #simplepleasures
There's nothing quite like the wonder of nature. #blueskies #countrylife #familyphotoshoot #simplepleasures