A body is so much more than just a body—
It’s a home.
It can grow other bodies,
Shelter them from harm,
Sustain them.
A body is a temple,
Made sacred by the presence of a soul.

But a body cannot be
Continuously sliced, sampled,
Diced, drilled into.
There is always pain attendant.
A body can only withstand so much.

Some pain never goes entirely away.

It was very difficult, but I managed to resist breaking into my box of Christmas clothes till after Thanksgiving. I even made it into December. But today, I crumbled like a gingerbread cookie.

See, I got these super soft leggings, and they are too comfy to be resisted…

I suppose the world may never know.

How do you show your Christmas spirit?

When I was little, I was obsessed with finding buried treasure. Even though I live in a landlocked state and grew up a good forty minutes by car from the nearest large river, I was certain that a trove of pirate treasure lay buried beneath the sidewalk mere blocks from home. After all, there were bootprints in the concrete. What better way to mark the spot than with bootprints that ordinary passersby would take for some construction worker’s careless mistake?

I loved time capsules back then, too. They were my own variation of buried pirate’s treasure. I’m fairly certain that, somewhere in my old backyard, maybe a foot or so down (because I’d have been too tired to dig any further), there lies a tin or ten of memories. And if my dad still lived in the house I grew up in, it would be a lot of fun to go digging things up back there, just to see what I could find. To see what I’ve forgotten.

I buried him, too. Because along with things, I bury people.

I remember when I was five and my grandfather died. My parents drove the two hours (give or take) to my dad’s hometown to attend the funeral, but left my sister and me at home because we were so little. I was furious. We hadn’t known the man – he and my dad were not close – but in my five-year-old mind, that didn’t matter. I should have been there.

There once existed a picture of my grandfather pushing me in a stroller, though. Or maybe that was my uncle, and the picture exists only in my mind because I loved it when my dad would tell me the story about my uncle pushing me in the stroller.

I buried them with resignation and heartache and immense, unfathomable grief. I buried them with soil and flowers and kind words, the sort that reassure those who hear them. Because I bury words and feelings, too.

I bury words, way down deep, till they come surging forth, angry waves upon the shore. I shove them down, bottle them up, try to keep them contained. I bury feelings deeper still, till they come seeping out, magma leaking through my cracks. I bury words unsaid next to the words I’ve said, but they tend to bubble up within me. Their memory burns me, so I bury them deeper, so far down that I forget their existence.

That is, until I can’t. Because eventually, those words and those feelings that I thought were buried come shooting back to the surface, fireworks in a dark sky, lighting the way to a different place. A better place. A place of new beginnings.

You see, I also bury seeds. I bury them without looking, sometimes without knowing. The things I bury in pain or in anger sometimes become seeds of hope with a little time and patience. Hope is a powerful thing; it cannot be contained. No matter how dark the night, the sun always rises, and hope with it.

What things do you bury?

Revisions continue, and I’m happy to report that I think I’ve crossed that hump I was stuck on.

I scan my handwritten pages so that I can type them up later, and as I was trying to open the scanner app on my phone, I accidentally activated my camera instead.  When it opened, it showed the image above.  For whatever reason, it spoke to me, and I wanted to share.  I really hope the rest of this revision goes as swimmingly as today’s writing session; I’d love to be done with this revision so that I can polish it up and send it out!

So, how’s the writing been going?

You see that picture to the right?  It’s taken me all week to write that much (plus two lines on the preceding page).  You might say it’s been slow going.  Lord knows I would.

In fact, I might even go so far as to say that writing this particular section of The Price of Mercy has been akin to pulling teeth, to pounding my head against the table until words bleed out, to prying the sweet story meat from my brain with a crowbar.  In short, it’s been a brutal, bloody mess, and I hope that when I finish this revision and get the think edited, it reads well because writing it has been a complete and total #*!@$.

What have you all been up to lately?

Some of my new pencils and my current WIP, an experiment in narrative poetry commissioned by Miss Tadpole: 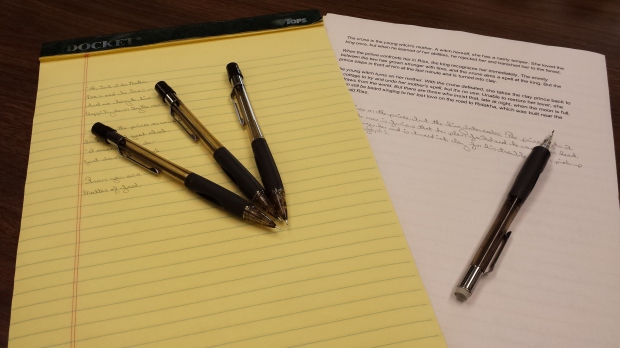 I’m having a lot of fun with this project, though I suspect I’d be having more fun if I didn’t feel like my head was stuffed with cotton balls.  Go away, cold!  No one wants you!

Now, where did I put that VapoRub? 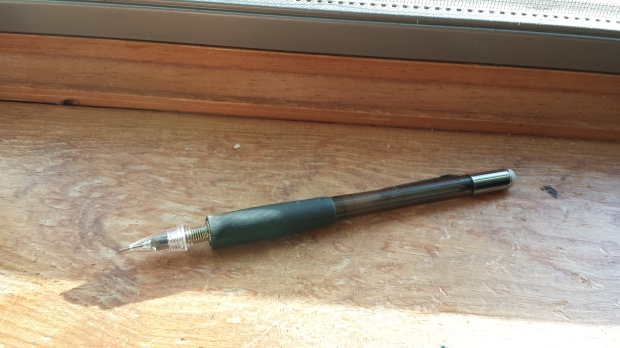 I’ve had this pencil for at least a decade (perhaps slightly longer).  I’ve written more stories with it than I can count, and a fair few books, too.  Sadly, it cannot be replaced – while they still make this particular model, the grip is no longer smooth, but patterned, and it irritates my fingers after a while.  Luckily, I’ve got a backup, but one day it, too, will go the way of its brother, and then I’ll be forced to replace it with the patterned grip pencil that I don’t like.

Of course, the patterned grip is still better than the dozens of other mechanical pencil styles available.

Rest in peace, oh pencil mine.  You’ve earned it.

I love lazy Sundays.  And since I’m feeling a bit lazy today, I don’t know what to write here other than I can’t believe it’s November already.

Another beautiful start to another gorgeous day.

Today was the kind of day that makes one glad to be alive.

I love Iowa. That is all.

That tree is on fire…

I could have watched this sunset forever.

The trees at Pine Lake looked so beautiful Monday on my way home from work that I just had to stop and take their picture: 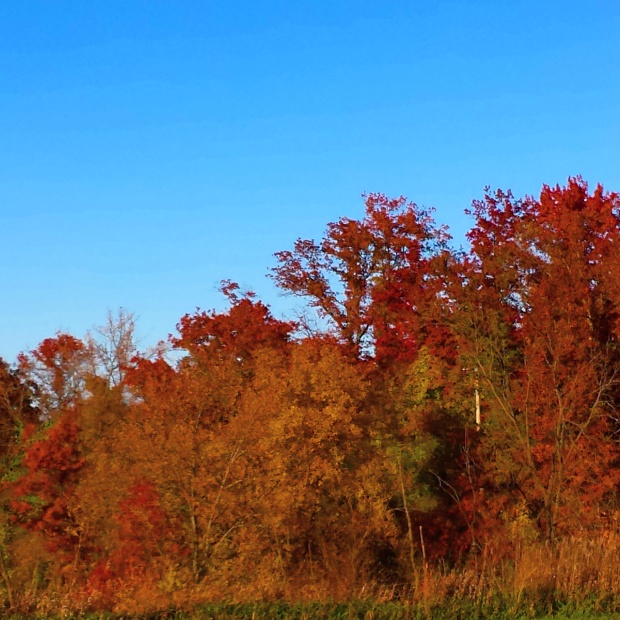 A friend of mine is lucky to commute through this beautiful area every day.  I think if I had to drive through there every day, I’d be late getting to work and late getting home, and my camera would have even more pictures of pretty trees than it already does. 🙂

Yep, it’s another beautiful sunset.  Last night’s sunset was magnificent; I could have watched it all night. 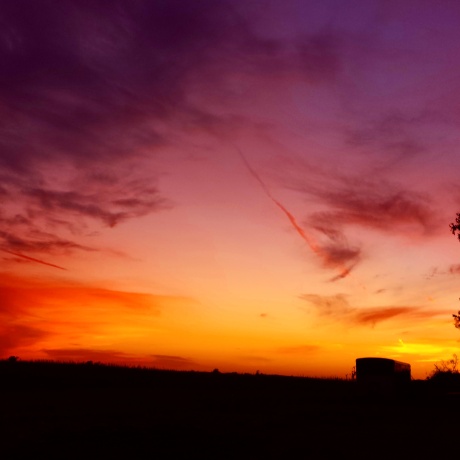 But this morning it was followed by an equally magnificent sunrise, which my hurried picture didn’t do justice:

The sun must be rising a little later, because it was dark when I woke up this morning.  I don’t like waking up before the sun because it’s awfully hard to leave my warm, cozy bed behind for the chilly darkness of early morn.