I am happy to have with me once again that inimitable poet, Tallis Steelyard, to talk a little about his latest adventures in Port Naain with his esteemed cartographer friend, Benor Dorfinngil. 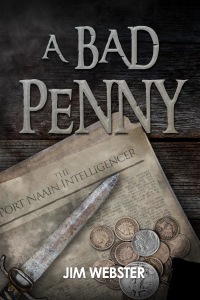 It is, I freely confess, a sore point. I feel somehow that my honour has been traduced, that my good name has been taken in vain. Indeed I, Tallis Steelyard, leading poet of my generation, has been shamelessly taken advantage of.
It started simply enough when I was asked to promote a short tale, ‘A Bad Penny.’ You’ve heard of it perhaps? I thought not. Perhaps I’ll have to explain further.

Some petty hack called Jim Webster, a writer of penny dreadfuls of the worst sort, inveigled his way into the confidence of an old friend of mine, one Benor. Now in his youth Benor lived for a while in Port Naain and we were (and still are) friends. So doubtless under the influence of a heady combination of generously plied strong drink and even more generously plied flattery, Benor started telling tales of his adventures in our proud city. So many of these stories were there that this Webster chap produced a collection of them under the title of the ‘Port Naain Intelligencer’.

Are you still with me? Anyway, I have to tell you, END_OF_DOCUMENT_TOKEN_TO_BE_REPLACED 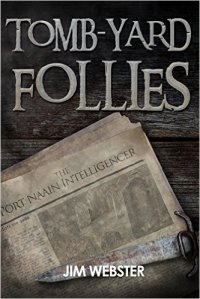 So my reading has been a little slow of late. Between sick kids and school events, revisions and renovations, it’s been a little hectic around these parts. But over the weekend, I managed to carve out enough time to read Tomb-yard Follies, the latest in Jim Webster’s Port Naain Intelligencer series, and these be my thoughts.

Getting back to the point, this was a bit different from the last two in that Tallis and Shena appeared less than they did in previous stories, but it was interesting to get more of a feel for Benor. I’d have liked a bit more in the way of explanation about Tizah, but perhaps the enigma that is Tizah will be further expounded upon in later stories?

Anyway, this was a lovely way to dispose of an afternoon, and I can’t wait to see what Mr. Webster comes up with next.

To get your copy of Tomb-yard Follies, head on over to Amazon or Amazon UK!

If you missed the first part of this story, look no further! You can find part one of Literally Critical right here. And now, to pick up where we left off…

The problem we faced producing both the ‘Port Naain Re-evaluation of Literature’ and the ‘Port Naain Guide to Literary Merit’ was not the workload. The real problem was the need for anonymity. Had we been able to credit the authors of the copy then we could doubtless have hired plenty of contributors. In fact, the act of merely offering money would mean that we would have been forced to beat writers off with a stick. On the other hand, had the Port Naain literary world known who was writing the content for these two publications; it would most likely have been we who were beaten with sticks.

The anonymity did lead to problems for some. I had to do a review of an event Lancet Foredeck had featured heavily in. Now I will admit that I have never let my long association blind me to the flaws in Lancet’s work. Installation poetry has always struck me as somewhat overblown, after all what poet worth their salt cannot spontaneously knock off a few stanzas or even just a rhyme or two when the situation calls for it.

But still, Lancet is a better than middling painter, a perfectly competent teller of tales to large groups of young children whom he can hold spellbound, and to be fair, he’s not a bad poet. But at the event I attended, he surpassed himself. He launched into a mixture of pre-rehearsed and spontaneous work which was breathtaking in its comprehension and range. As he finally sank down into his seat the entire audience stood to applaud him. Even those who were merely present to drink at the bar rose to applaud him. Indeed the barman brought him a tankard of the bar’s best ale to quench his thirst without even being asked or staying for the money. On that day, END_OF_DOCUMENT_TOKEN_TO_BE_REPLACED

Tomorrow, another one of poet Tallis Steelyard’s intriguing adventures will hit the virtual shelves. In honor of the event, here he is to talk about the life of a literary critic:

It is true that looking back I have had an interesting career. Indeed there is much I have achieved that I can look back upon with a sense of modest pride. There are very few incidents I feel disinclined to recall to mind and few about which I feel any real shame. But because I feel a duty to a younger generation of poets and other writers, I believe it behoves me to set aside my regrets, my mortification, and tell the plain unvarnished story. You see, I too have dabbled in literary criticism; I have dipped my pen in its unhallowed waters.

Now I don’t want anyone to assume that I did this because I was pandering to some unfathomable malevolence within my nature. No I did it for the most honourable of all reasons; we needed the money.

On reflection, one sees that within the life of even a great artist there are times which appear designed purely to test your mettle. This was one. Shena had not been well, she had caught something she just couldn’t seem to shake off, and she spent much of the winter confined to the barge. This meant that our income dropped considerably, we were faced with having to heat the barge during the day, and what reserves we had were waning rapidly. I had attempted to take her place dealing with the shore combers, but frankly I never made a tenth of what Shena did, and what I did make was purely because some of their number took pity on me and shared my desire to see her fit and well and back at work.

END_OF_DOCUMENT_TOKEN_TO_BE_REPLACED

With me today is a poet of some renown, the inimitable Tallis Steelyard, to talk a bit about poetry and adventure. 🙂

I am, of course, a poet. None the less I am not biased and recognise that there are other fields of artistic endeavour which might even be considered legitimate. That being said I have always had my doubts about novelists.

This reminisce was brought on by reading the obituary of old ‘Truly’ Gicken in last nights ‘Port Naain Intelligencer’. I honestly never knew his given name, everybody called him Truly, even his wife, because of the habit he had of starting his sentences with that word.

But I remember him in his prime. He was the younger brother of Ardwok Gicken, who ran Gicken’s Printers. Ardwok didn’t have an imaginative bone in his body, but no finer printer ever drew breath. Truly was almost the opposite, but in his own way he was touched by genius. It was he who came up with the idea of ‘The Port Naain Annual Poetry Yearbook.’

What he did was canvas all the poets, potential poets, would-be poets and ‘thought they could be poets if only they’d had the chance’ in Port Naain. For a not insignificant sum he would include their poem in the yearbook. Well for me five vintenars is a not insignificant sum, even now. My lady wife and I can still live well for a day on that sort of money. But of course he was selling them a piece of the dream, he was promising them ‘exposure’, making it possible for their genius to be recognised, and of course they fell for it.