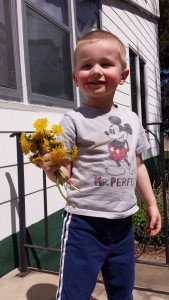 All kids drive their parents crazy, some more than others. Take Thumper, for instance. He’s my baby, the youngest of my four children, and the reason I can’t have nice things. He’s the reason I started sprouting gray hair before I hit thirty, the reason I’m sick of my own name, and the probable cause for any alcoholism his daycare teachers may suffer from.

But you know what? He’s perfect. He may be stubborn to a fault and have more energy than any one person should ever have, but he’s also the happiest four-year-old I’ve ever met. He has such a good heart, even when he’s feeling ornery, and he’s so stinkin’ adorable that I can never stay mad at him for long. I am lucky to be his mother.

For the record, I am lucky to be mother (and stepmother) to three other pretty fantastic kids, too. But I feel especially lucky to be Thumper’s mother, because I almost wasn’t, a fact I was reminded of last night.

We’ve been having an epic JAG marathon the last couple of months and we started season 6 last week. Tonight we watched S6E6, “The Princess and the Petty Officer,” which I really enjoyed, for the most part. Oh, sure, I thought the admiral’s girlfriend was completely daft (if ever a woman had her head buried in the sand, it was Dr. Sydney Walden) and her son really quite creepy (Don’t worry, McGee, I still love you!), but I enjoyed the echoes of The Princess and the Marine, which I have no doubt influenced this particular episode.

Anyway, it was a great episode, right up until the end. I knew something bad was coming (SPOILER ALERT, despite the fact that you’ve had fifteen years to watch it) because I’d made the mistake of looking at the back of the DVD case, but I was unprepared for how it would affect me. When Bud broke down crying over his daughter’s death, I cried right along with him, because that could have been me. It almost was. Thanks to a moment of carelessness by my doctor, Thumper aspirated some fluid and stopped breathing mere moments after birth. It took a team of nurses to get him breathing again, but in the end, they did.

But for the longest two minutes of my life, I didn’t know whether my son would make it. I was strapped to an operating table, unable to see much through the horde of nurses surrounding Thumper after they called a code pink. What I did see scared the hell out of me – his skin had a bluish tint to it. When the anesthesiologist started comforting us, Seymour went into panic mode. He grabbed hold of a pole to steady himself (whether it was my IV pole or the one holding up the surgical curtain, I no longer remember), and he was shaking so hard it caused the pole to shake, too. He had a better view than I did; his show of nerves scared me all the more.

Later, when I watched Thumper’s birth video, I saw how bad it really was. He hadn’t just turned blue. He was purple. He looked like a seven-pound plum. And I will never be able to watch that video ever again.

I cannot imagine life without my crazy, sweet little boy. He drives me up the wall and out of my mind, but I know that someday, those same qualities – that same stubbornness and energy and curiosity – will serve him well. And if he keeps his good heart? Well, the world could use more people like that. 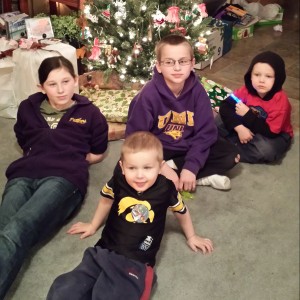 Occasionally I ponder what life would be like without them and, sure, I’d have more time to myself, but I think I would be the poorer for it. My children bring joy to my life. I’ve done things I never would have done if not for my children (like going on the funnel ride at Lost Island Water Park). And someday, when they’re grown up and gone and busy with their own children, I know I’ll look back on this time and smile.

After all, with any luck, my grandchildren will be just like their parents. 😉

Do you have children? If so, what about them makes you feel especially lucky?

6 thoughts on “I feel lucky”