How will you spend yours?

…because sometimes a reminder of all that is beautiful in the world can make you feel whole, even when you’re broken.

What beauty stirs your soul?

It was a dry snow; I could tell by the way it swirled in the wind. I shivered.

Old Man Winter wasn’t about to go quietly into the night. Oh, no. He raged outside me window against the coming of the light, huffing and puffing with all of his might. We’d have another foot by morning, or I wasn’t Effie McCray.

At least it would move easily, being so dry. Thank goodness it weren’t packing snow.

Packing snow was heavy, wet stuff, perfect for felling timbers and building snowmen. But we didn’t have any old trees, or even any young ones, to worry about anymore, nor any young’uns itchin’ to build a snowman. The ice storms had already taken care of ’em.

I rolled over in bed so’s I faced away from the window. The fire was out in the hearth, and I was out of logs. Oh sure, there were plenty out in the woodshed, but I weren’t about to fetch more. Not after dark, no siree. END_OF_DOCUMENT_TOKEN_TO_BE_REPLACED

The fog wove in and out of the trees, making the dark of night seem even darker. The light from my high beams disappeared into the void, swallowed whole by the night. I’d driven this road every night for as long as I could remember, yet tonight it felt new. Strange. Ominous.

I heard it as I rounded the curve, a kettle’s high, whining song, only much, much louder. Home was just within view, and just out of reach. And then, engulfed by a blinding fireball, it was gone.

I sat for a moment, watching the blaze. And then I backed up, turned around, drove into the night till the flames were no more than a memory. The fog wrapped itself around my car as I drove, and I let it envelop me like a warm blanket.

In honor of the fact that it’s only 8:00 a.m. and already about as far from a stellar day as it’s possible to get, I thought I’d share a favorite joke of mine. If you’re a long-time reader (or even if you’re not), you may have seen this before, as I shared it some years ago. It’s one of those things that’s funny because it’s true, and I hope you enjoy it.

August 12
We moved to our new home in Iowa. It is so beautiful here. The hills are so pretty. I can hardly wait to see snow covering them.

October 14
Iowa is the most beautiful place on Earth. The leaves are turned all the colors and shades of red and orange. Went for a ride through the beautiful woods and saw some deer. They are so graceful. Certainly they are the most wonderful animals on Earth. This must be paradise. I love it here.

November 11
Deer season will start soon. I can’t imagine anyone wanting to kill such a gorgeous creature. Hope it will snow soon. I love it here.

December 2
It snowed last night. Woke up to find everything blanketed with white. END_OF_DOCUMENT_TOKEN_TO_BE_REPLACED

If there’s a better way to start off spring than with a beautiful sunrise, I don’t know it. 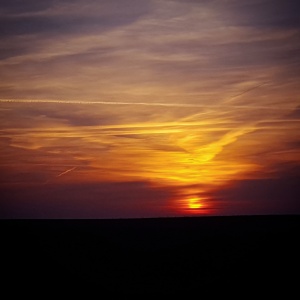 How did the first day of spring treat you?

Fear is more than just a dirty word.

It chills my hands, my feet, my chest. It sends shivers up my spine, ripples through my core. It freezes me.

It radiates from my center, permeates everything around me. It destroys my confidence. It debilitates me.

With a name comes power. Now that I know the name of this unspeakable and overwhelming foe, I can defeat it.

I have the power.

Fear had better watch its back.

It’s not that hard. See? You just part your lips a bit. Show off those pearly whites.

What do you mean, you don’t feel like it? You used to smile all the time. You were the smiley girl.

What do you mean, everything’s changed?

Go on, then, smile. For old times’ sake. Just smile.

Thanks to the wonders of sharing (read: Sick Kid #1 shared with big brother (and also, apparently, with Dad)), I ended up spending today at home. Okay, I thought, I’ll get him all tucked into bed and have a nice quiet day. And then I remembered that it’s spring break and, unlike last week, I would not have the house to myself.

So much for that nice, quiet day.

Instead, I calmed down an upset little Cricket, who wanted to watch a movie instead of going to lie down in bed. I gave him some Tylenol to get his fever down, tucked him into bed, and read him a story before turning his bottom bunk into a nice, dark cave. Then I sat down and stared at my computer screen for a little while. Didn’t really do anything, just stared (and scrolled through Facebook). Thumper played on his Leapster, which he loves, and I love that he’s so into the educational games. Kid loves to learn. 🙂

I ended up running to the store while Miss Tadpole watched her brothers for a few minutes, because Cricket wanted some 7-Up. A quick stop at the library for a print job led to an unexpected yet exciting conversation with the librarian (watch this space for details). When the caramel apple dip in stock at the grocery store proved terribly disappointing, I decided to make my own and then prayed I had all the ingredients.

I did, and it was amazing. I have my seventh grade home ec. teacher to thank for the cookbook I got the recipe from, and a longtime bestie for the recipe itself. And, thanks to the wonders of Facebook, I was able to thank them both. 🙂

Miss Tadpole and I spent the afternoon eating apples with our homemade caramel dip and watching movies. It is my considered opinion that one can never see The Cutting Edge or Emma too many times (which is probably a good thing, since I have two versions of the latter). We talked, and laughed, and it was so, so wonderful.

What I thought was going to be a less-than-fun day at home (I hate when the kids are sick because I feel so powerless and all I want to do is make them feel better, but I can’t) turned out to be pretty fan-darn-tastic. Between sick kids and bored kids and moody kids, it could have been a not-so-nice day. But with Cricket eventually content to sleep away the day and with Thumper absolutely absorbed in his animal-catching game, it was actually pretty peaceful.

In some ways, I think the teen years are even harder than the newborn and toddler years because there’s just so much going on, and sometimes it’s hard to remember what it was like to be that age. After all, fourteen was a lifetime ago. And fourteen was hard.

I spent some time yesterday organizing the zillion or so pictures I took in 2016 in preparation for compiling our annual family photo book. It was a complete pain in the butt because I don’t think I did anything with them at all last year, other than move pictures from my phone (which I used way more often than my Nikon last year) onto my computer into a file called “camera pix – need to sort.” It took me forever to get them all sorted, primarily because of this:

Because I am so easily amused, I spent probably a couple of hours trying to make a gif of said bouncy fun. But, my computer being the junkpile that it is, it didn’t want to cooperate. Photoshop kept freezing, and what I wanted to do was bigger than most of the online utilities I found would allow.

I spent probably half of this morning fooling around with it some more and finally got what I wanted to do cut down to a reasonable size.

Now, to scamper off to dinner before I make some more. 😀 How are you spending your weekend?