Hello, all! What’s new with you? Anything?

END_OF_DOCUMENT_TOKEN_TO_BE_REPLACED

In honor of the fact that it’s only 8:00 a.m. and already about as far from a stellar day as it’s possible to get, I thought I’d share a favorite joke of mine. If you’re a long-time reader (or even if you’re not), you may have seen this before, as I shared it some years ago. It’s one of those things that’s funny because it’s true, and I hope you enjoy it.

August 12
We moved to our new home in Iowa. It is so beautiful here. The hills are so pretty. I can hardly wait to see snow covering them.

October 14
Iowa is the most beautiful place on Earth. The leaves are turned all the colors and shades of red and orange. Went for a ride through the beautiful woods and saw some deer. They are so graceful. Certainly they are the most wonderful animals on Earth. This must be paradise. I love it here.

November 11
Deer season will start soon. I can’t imagine anyone wanting to kill such a gorgeous creature. Hope it will snow soon. I love it here.

December 2
It snowed last night. Woke up to find everything blanketed with white. END_OF_DOCUMENT_TOKEN_TO_BE_REPLACED

Either way, this is pretty much how I’d like to spend it:

I don’t know if it’s the weather or what, but I’m just not feelin’ the whole responsible adult thing right now. Catch ya on the flip side!

Did you know I have superpowers? I do! Really! 😀 They include, but are not limited to:

A while back, Seymour and I were discussing what our superpowers would be if we had them, which got me thinking about things I’ve done that a much younger me never ever even considered as life possibilities. We decided that my superpowers would involve bad jokes and grammar, and my new favorite joke was actually a product of this conversation:

Yes, yes, I know – they’re both groaners. But if I can’t let my nerd flag fly here, then where the heck can I?

How about you – what are your superpowers?

This week in weather: 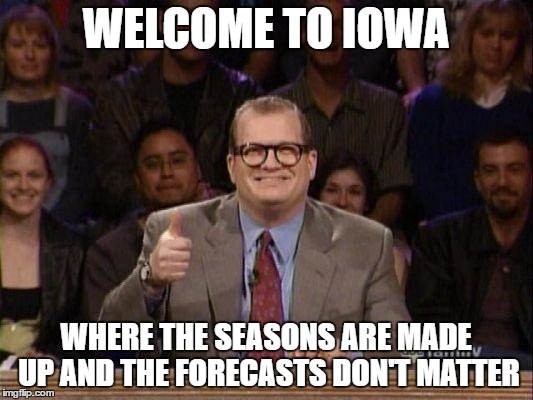 Hope you’re having a great start to your week!

Self portrait courtesy of the movie Inside Out.

According to Facebook’s “On This Day…” feature,  I was having a Leopold Bloom moment on this day back in 2007, and you know what? I kinda want my blue blanket right now, and I don’t even have one.

Well, not a blue one. I do have a striped blanket, though, and it makes an excellent shawl. Why didn’t I grab it on my way out of the house this morning?

Oh, right – because I was too busy being hysterical. At least I wasn’t hysterical and wet.

How’s Monday treating you? Will you go trick-or-treating tonight? Let’s look on the bright side of this Monday together!

Mara Eastern recently described a lousy Christmas, and it reminded me of something similar that happened to me back around Thanksgiving. After leaving a lengthy comment on her post, I thought, “Hey! This might make a funny blog post!”

Thus the following was born. 🙂

My husband’s been away for work during the week for the past two months, so naturally, he took a few homey things with him to make his hotel room feel less hotelly. One of those things was our very nice can opener. Silly me, I didn’t even realize it (or our salt and pepper shakers) was missing till he’d been gone for a month and I wanted to have chili. But I didn’t want to spend a whole lot on buying a new one since we already had a really nice one. Still, the craving for chili was not to be ignored. And since I needed tomato juice, too, I stopped at Fareway on my way home from work.

After wandering the aisles for a good ten minutes, I finally tracked down their cooking utensils. They had all of one can opener in stock that night, and at $1.97, the price was just right. Still, I had to wonder about its quality. But a trip to Walmart was out of the question because it would make me late picking the boys up from daycare, so I pushed my doubts aside and headed for the check-out.

Similar to el cheapo can opener

Twenty minutes later, I’d picked up Cricket and Thumper up from daycare and made it home. It was a blustery night, perfect for chili, and I couldn’t wait to have some. I got the boys in the house, grabbed the beans and hamburger from the basement, and set about making supper. While I waited for the hamburger to thaw, I decided to get the beans opened and drained.

But of course, nothing ever happens easily on a Monday.

But halfway through opening the second can, reality came crashing back upon me. Part of the can opener snapped off as I turned the hand crank. The whole thing fell apart in my hands.

Well, crap (and many other colorful words). Now what the heck was I supposed to do?

Perfect for opening cans of juice, but not so much for beans

By this point, the closest store was closed for the night. I considered using a church key to open the rest of the cans, but quickly discarded the idea. There was no way I’d be able to shake all those beans out of the tiny little holes a church key would make. Even if I could have shaken them all out, it’d have taken all night. Too bad I hadn’t been opening the tomato juice – then I’d have been fine.

Oh, can opener, thank you for not breaking on me!

I got my chili eventually, after spending a few more dollars to buy a decent-quality can opener, but I’m still annoyed about the stupid cheap one that didn’t even last five minutes. I hate wasting money like that, even though part of me knew it wouldn’t last. And now that it’s freezing cold here again, chili is starting to sound really good for supper tonight… 🙂

Have you had equipment malfunctions ruin a much-anticipated meal? How did you cope?

And I really wouldn’t mind having a sparkly tiara to match!

All I want is peace on Earth and a really cute pair of shoes.  –Suzy Toronto

Score one for the savvy garage saler!

It’s amazing what brings people out on the town. There’s an apartment complex next door to our house and one of the tenants came over to see what we had for sale. “Whoa, it’s like a little store!” she exclaimed upon entering, holding a glass of questionable contents. “Oh, I love your lamp! I want this lamp. I’ll be back for it. You guys have exactly what I need, I swear. You really do. You have everything I need. I’ll be back. Oh, I love this lamp! I want your lamp.”

After several painful minutes of rambling, she left, only to return about a half hour later with her dog in tow. She wasn’t quite as high when she came back, thankfully, but still, when she went digging through the box of miscellaneous knives, my mother-in-law and I got a little nervous. Seymour’s mom looked at me and said, “No offense, but if she goes nuts and starts attacking, you’re on your own.”

I couldn’t help laughing at that.

Redefine the impossible – you’re only bound by the limits you set.

The sky is not the limit.  –Suzy Toronto