Hey @kaysiewrites I was wondering whether you’d be interested in hosting my friend @HMGoodchild or reviewing her book http://t.co/9Wh5ogVswG

If you haven’t heard of Harriet Goodchild yet, you should have.  And you’re in luck!  Because today, she’s going to chat with me about writing, fantasy, and her latest book, After the Ruin.

KK: Hi, Harriet.  Tell us about yourself.

HG: I live in Edinburgh now but I was born in the west of Scotland and go back there whenever I can. Lest that sound a narrow life, I’ll say I’ve lived in a few other places as well, including the United States and Australia, and spent twelve years in Oxford. Life in Oxford is rather like living in a fantasy novel: pretty soon you start meeting seneschals or quaffing from an aurochs horn after dinner.

I share my flat with two pets: a Bengal cat called Talisker and a very large goldfish called, imaginatively, Big Fish. Big Fish is outgrowing her third tank and soon I’m going to have to find a safe pond in which to rehome her. Until then, Talisker enjoys sitting nearby her tank to keep her company. Or at least I think that’s her reason. Never assume nefarious intent, even in cats!

KK: Have you always written?

HG: In my teens I wrote a lot. Short stories and poetry, mostly, and a novel that rambled on and on through several college notebooks, acquiring characters along the way. It wasn’t good – and I hope it never surfaces – but I enjoyed writing it hugely and that’s all that matters. Some of the ideas in those stories, in fact, laid the groundwork for all that I’ve written since, although I think my writing has improved since my teenage years. After that, reading a lot and writing a bit was enough, although I published some non-fiction along the way. Then, END_OF_DOCUMENT_TOKEN_TO_BE_REPLACED

We’ve had two beautiful days in a row.  It’s so pretty outside! 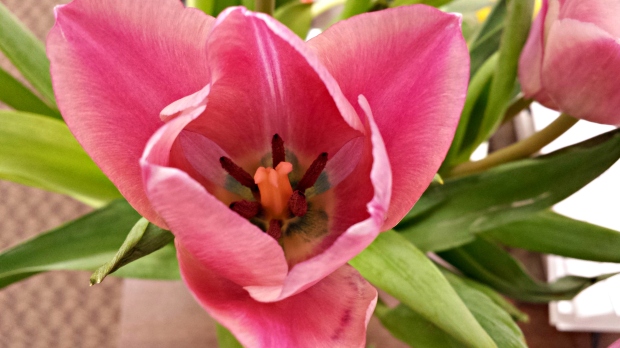 Okay, so it’s a little chilly, but still – the sun is shining, there’s not a cloud in the sky (that I can see without my sunglasses), and it makes one feel good to be alive.  Much like this pretty, pretty tulip. 🙂