Cricket’s nothing if not silly.

But then we came to this picture:

And when I asked him who was in this picture, without missing a beat, he said, “Um, that’s my godfather and his princess.” 🙂

So today’s prompt is about stories.  Quite convenient, really, as I just posted an interview with the main character from The Price of Mercy. 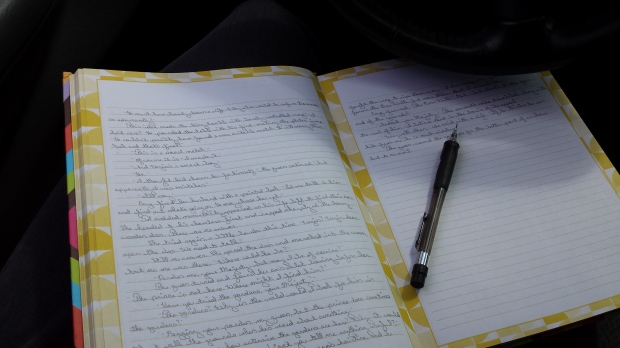 Revision work continues.  I got absolutely nothing done on it yesterday, but I managed to eke out a few paragraphs this noon while on my lunch break.  I wish either a.) that lunch breaks were longer so I could get more done, or b.) that someone would pay me to stay home and write all day.

Since neither of those things are likely to happen anytime soon, I guess I’ll just have to keep plugging away a few minutes at a time.  Don’t forget to check out Charnele’s blog and see what stories she’s into.  Happy Friday, everybody!

I was tagged in this bit o’ fun by the awesome Justine Manzano, a fellow legal secretary/writer/geek/mom to whom Twitter was kind enough to introduce me.  (I seriously love making new friends.)  It was supposed to have gone up on Monday (the 15th).  Yeah, that didn’t happen.

Justine Manzano is a multi-genre writer living in Bronx, NY with her husband, son, and a cacophony of cats. Her short fiction has appeared in the anthology Things You Can Create, Sliver of Stone Magazine, and The Greenwich Village Literary Review.  She maintains a semi-monthly blog at JustineManzano.com and a twitter account where she discusses her adventures in juggling aspects of her life such as motherhood, writing, and the very serious businesses of fangirling and multiple forms of geekery. She works as a fiction reader for Sucker Literary Magazine and is currently searching for a publishing home for her YA Urban Fantasy series, Keys and Guardians.

The first book in Justine’s series is called The Order of the Key.  What’s it about?  So glad you asked!  Here’s the blurb:

Jacklyn Madison has a thing for heroes. She reads about them, watches them on TV, and would very much like to become one. When a monster makes an attempt on her life she discovers she is one – the long lost member of The Order of the Key, a group that protects humanity from creatures that come through interdimensional rifts. It’s all fun and games until training for her duties reveals the Order’s out of touch views – Keys, like Jacklyn, are protected while Guardians, like the rest of her family, are expendable. As she rails against their value system, she finds herself in the center of a power struggle between the group’s leader, Lavinia, and her idealistic son, Kyp – the boy Jacklyn likes. Worse, Kyp’s attempts to protect her only entangle her in a mire of deceit. Viewed as a target on one side and a weapon on the other, Jacklyn must find a way to protect the people she loves and decide what kind of hero she’s willing to become. Filled with action, romance, and paranoia, The Order of the Key is an edgy Young Adult Contemporary Fantasy novel that is currently searching for a home with an agent.

I love the name Lavinia.  It’s so pretty and old-fashioned. 🙂

And now it’s my turn!  Here to answer END_OF_DOCUMENT_TOKEN_TO_BE_REPLACED