With me today is another new author, Sam Smith.  His debut novel, Trees, releases on October 31 from Safkhet Publishing.  Take it away, Sam!

My thanks to Kay Kauffman for asking me to guest on her blog.

Although I’ve done many things sub-literary in my writing life – organised poetry festivals and book fairs, run a small press, Original Plus, and for nearly 20 years now the poetry magazine The Journal (once ‘of Contemporary Anglo-Scandinavian Poetry’); and although I’ve had many publishers of my work, 2 of which went disastrously bust while I was working as editor for them, Safkhet Publishing is the first that has suggested that I be a guest blogger. 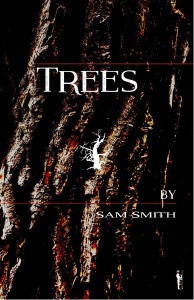 The novel by the way is Trees and Safkhet are based in Germany.

I’m based in the UK on the Cumbrian coast. Maryport describes itself as ‘By the sea near the Lakes.’ Not wholly sure

how I ended up here, suffice to say that I like walking over mountains and I’ve moved about a bit. And my daughter Shelley Carmen was living in Edinburgh at the time we last moved. My usual author biog says, ‘… I was born Blackpool 1946, am now living in Maryport, Cumbria. A freelance writer, I have been a psychiatric nurse, residential social worker, milkman, plumber, laboratory analyst, groundsman, sailor, computer operator, scaffolder, gardener, painter & decorator…. working at anything, in fact, which has paid the rent, enabled me to raise my three daughters and which hasn’t got too much in the way of my writing.’ All of my daughters, and grandchildren, now live in the south, which annoyingly means I see a lot of the M6.

Here’s a photo of me trying to look cool in the south of France.

The currently popular singer Sam Smith by the way is a clone. One of many talented individuals, male and female, bearing my monicker. We altered singer Sam’s DNA and gave him a musical gene. Hope that clears up any confusion.

But about Trees… The initial publicity says ‘As H was for Hawk will T now be for Trees? D for Distraction? P for Platonic? S for Sam? Or Smith?’ Which I hope will give putative readers a decent clue to the book’s contents. ‘H for Hawk’ concerned itself with a reconciling of the bereaved through falconry. Trees has a different death, an adopted daughter, and the mother finding solace through helping her birth father in his attempt to reforest as much as he can of England. Consequently each chapter has throughout descriptions of trees and diagrammatic representations of trees. (A labour of love Trees has taken me years to complete.)

Although death might be the central feature of Trees what it mostly concerns itself with is the nature of family, and of those relationships beyond. Of friendships, and resentments, people we work with, of in-laws and outlaws. Of desires contained, physical capabilities and incapacities, sexual orientation, and trees.

Safkhet has set 31st October as the release date for Trees. You can read more about Trees here or here.

Other of my books are featured here. The Journal and Original Plus here.