I saw this week’s Discover Challenge post about transcribingmemory about a day after I had discovered the site for myself. Being a huge fan of diaries, and having kept diaries of my own since I was eight, I knew this was a challenge I could have a lot of fun with. I may not be nearly as devoted to my diaries as I was before I had kids, but I do still write in them every now and then, and this challenge provided me with the kick in the pants I needed to sit down and read through some of my old, old, OLD writing once again. 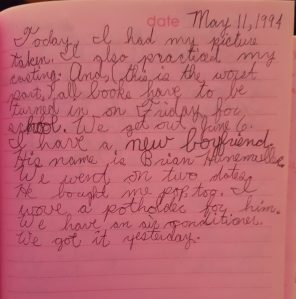 I learned a few things from reading my old diaries:

I also ran across some things of actual interest. Below, in its glorious entirety (there’s that sarcasm again), is my entry from September 11, 2001:

I never thought anything like this would ever happen. This morning, terrorists bombed the World Trade Center and the Pentagon. The terrorists hijacked planes from Boston and Newark and flew straight into the buildings. The twin towers both collapsed, as well as World Trade Center Number Seven. There’s a giant hole in the side of the Pentagon, and the fourth plane, the one that was hijacked from Newark, crashed 80 miles southeast of Pittsburgh, Pennsylvania. I guess the planes were hijacked at knifepoint. The prime suspect is Osama bin Laden.

In East Jerusalem in the West Bank, there were parades. The children were given candy and sweets, they burned American flags and stomped them into the ground, and they ran through the streets shouting, “God is great!”

Every airport in America has been closed, and every plane has been grounded. The whole country is paralyzed. Gas prices are soaring – this morning, it was about $1.60 a gallon, and by 4:00 this afternoon, it was $4 in Des Moines. Communication via mail has effectively ceased – looks like I won’t be getting any college stuff tomorrow.

They say that the younger generation of Americans has no sense of patriotism, but I disagree. I think quite a few people in my class are chomping at the bit, ready to go after those responsible for today’s attacks. I know Christy had been seriously considering joining the air force, and today she decided she was definitely going to enlist. She wanted to do it soon, but her parents won’t let her enlist till she’s 18, so she’s mad. But that’s only a two-month wait, so I don’t see what she’s so mad about. And the death toll is in the thousands and climbing.

Everything today has revolved around the news. I watched or listened to the news in almost all of my classes. All of them except band, music theory, and world lit. We played first hour, and got out early for class meetings. I had the opportunity to watch it seventh hour, but I did my homework instead. Eighth hour I took a test.

Today has just been unbelievable. I went down to Pronto earlier to get a bottle of juice, and there was a line at the register from people paying for gas. The whole lot was full of cars – people were going nuts trying to get gas before the prices jumped. Martha said it was just as bad over at Casey’s. And Doreen, the lady that owns Nana Rosa’s, said people were swamping the store, buying food like they were preparing for a blizzard or something. I guess people on the radio and on t.v. were saying not to panic, but people were doing it anyway. Come on – we’re only human. How do you expect people to not panic in a situation like this? Get real.

We’re watching Fern Gully 2 right now, instead of the news. I like the first one better.

The president went on t.v. tonight and addressed the Union. I wanted to see it, but Christy and Colt saved me from the she-devil by dragging me down to Christy’s, so I missed it.

Speaking of the she-devil, she pissed me off tonight. She sat there and bad-mouthed Christy right in front of me, and then turned around and bitched me out when I defended my friend. If she wants to diss Christy, that’s fine, but I don’t want to have to hear about it. And then she had the nerve to say that she knew why I didn’t like her. She thinks I think she’s trying to replace Mommy, and that’s why I don’t like her. That is so far from the truth that it’s laughable! I don’t like her because I plain don’t like her. I know she’s not trying to replace Mommy – first of all because she’s married. I mean, how dumb does she think I am?! She has some serious problems if she truly believes that I think that. How can people be so stupid?

I really need to shave. Too bad I’m so lazy! 🙂 I also have a few things to mail, and I really should write back to Pastor John. And I should do my timeline and my government project. Those are gonna be due before I know it. I’m working on my laundry project right now – I’m doing the laundry! 🙂 I’ve got my first load in the dryer, my second load in the washer, and my third load in my hamper, waiting to be washed.

Some of that made me cringe a bit upon rereading, but it was interesting to revisit the person I used to be, especially at that point in time. I often think I’d like to be more like the girl I used to be, because I’m not generally happy with the person I’ve become. But turning back the clock only really works in the movies, and every experience I’ve had in life has influenced the person I am today, whether for good or bad.

I just have to figure out how to be comfortable in the skin I’m in, I guess, and that’s so much easier said than done.

What about you – are you a diarist? Do you ever read back through your old writing? What have you learned by getting in touch with your younger self?