Once again, I find myself penning a post about a family vacation.  This time, summer has come and gone, taking our family vacations with it.  This time, due to school starting in the middle of August (don’t ask me why), we were forced to cut our trip short by a day and decided not to go camping.  See, from what I understand, schools are not supposed to start till after Labor Day (September 3 this year), but they are allowed to apply for a waiver if they would like to begin prior to that date and the governor can either approve or deny the request.  I can’t recall him ever denying a waiver request and I can’t recall school ever beginning after Labor Day; it’s always started in August, and it starts earlier every year.  This year, our school started classes on August 15, but I know some schools were in session last week.

But I digress.  Instead of going camping up north like we’d planned, we headed south, invading Seymour’s parents’ house for a few days and running ourselves ragged.  We drove down Sunday morning (an hour and a half trip), then he, Tadpole, and Grandpa took off for Lake Red Rock to go fishing and tubing while Cricket, Thumper, Grandma, and I headed off for Jordan Creek Mall for a little retail therapy.  Unfortunately, the curse of the tires struck again – as we were leaving the Golden Arches Supper Club for the mall, I noticed a bulge in my front tire.  Since we couldn’t do anything about it till we got home, we prayed nothing bad would happen and continued on our way.  Luckily, nothing happened.  I bought a pretty pocket watch and tried not to drool all over the pretty, pretty jewelry that sparkled from beneath the glass cases in each of the half-dozen jewelry stores we traipsed through.  After a horrendous accident a couple of months ago, Seymour’s mother lost every piece of jewelry she owned, including her wedding ring, her engagement ring, and several heirloom pieces.  At the family reunion a couple of weeks ago (which was also their 40th anniversary), Grandpa asked Grandma to marry him again and give him another 40 years.  He told her she could go pick out a replacement ring, so that was how we spent our Sunday.  One of the salesman who helped us was hilarious – he looked a bit like Ryan Reynolds and was a real cut-up.  He was funny, helpful, knowledgeable, and best of all: not pushy. 🙂 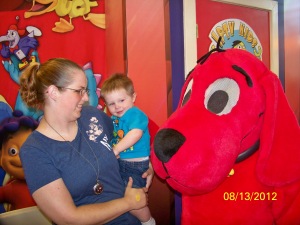 Don’t let that shy look fool you – he was one happy little Cricket.

Monday we went to the Iowa State Fair, but first, we had to replace my tire.  I haven’t been to the fair in several years and I had been hoping to go sans small children, but the only person we were able to find to watch the kids wanted an awful lot to watch them, so we took them along.  I’ve done the fair with small kids before because we used to go every year when Tomcat was little, but it’s not as much fun when you have tiny, tired people with you.  But they were really good, despite being very, very tired.  We took them all over and when we got to the Varied Industries Building, Tadpole noticed that Clifford the Big Red Dog was at the Iowa Public Television booth.  Cricket adores Clifford.  We took him over to say hi and his face lit up like a Christmas tree; he was so excited that all he could do was point and say, “It’s Clifford!”  And that was all we heard for the next five minutes.

“Alert and Ready” by S.W. Huffman/MetalScapes

There is so much to see and do at the fair that I think you could probably go every day for the duration of the fair and still not experience everything.  We saw the butter cow and Snow White and the Seven Dwarfs, as well as the ice sculptures (there was even an ice dragon!) and a metal sculpture of a horse called “Alert and Ready” in the Agricultural Building.  We hiked up the hill to the Cultural Center to see the sand castle that a couple from California builds every year, only to discover that they aren’t going to do it anymore.  It had been replaced this year by a sculpture that was supposed to represent the clean-up of Iowa’s waterways, but I neither liked it nor saw it as what it was supposed to represent.  Then again, I was so disappointed in the lack of sand castle (and I was admittedly petulant about it) that I may or may not have been a little bit biased.  I would have loved to look at the photography exhibit in a little bit greater detail on our way to the (lack of) sand castle, but no one else seemed very interested, so I had to look quickly as we passed.  There were some very talented photographers on display this year.

This dollhouse – and everything in it – is made entirely from plastic canvas. Talk about incredible! 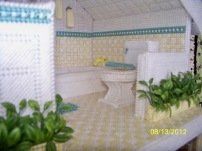 The bathroom, complete with wallpaper and towel bars.

The bedroom, with lovely vanity and detailed bedspread.

The living room, complete with TV, bookshelves, and fireplace.

The kitchen, with flowers in the window. Pretty! 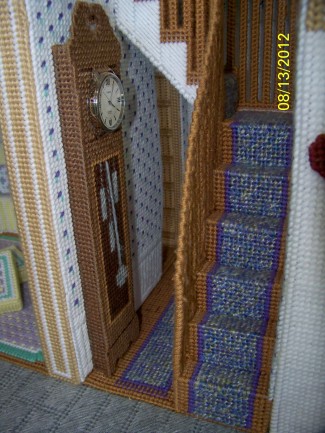 The hallway, complete with grandfather clock and stairwell. 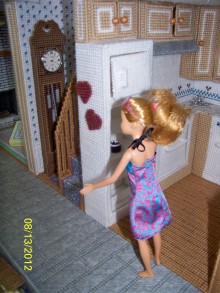 There’s cake in that thar fridge! 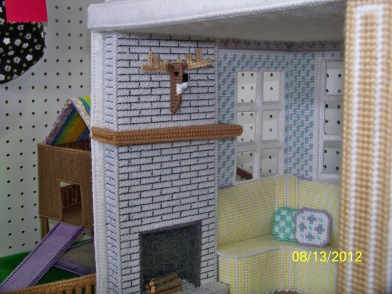 And look at that, burgers and brats on the grill. It’s party time!

Tuesday we dropped Cricket and Thumper off at a local daycare and headed for Adventureland, home of the Dragon (and also the Raging River, an infinitely superior ride, in my humble opinion – but only because I don’t like rollercoasters, unless we’re talking the Underground, the most awesome rollercoaster EVER).  We had planned to go to Adventure Bay, too, and do the whole water park thing, but Adventureland is just so big that, like the state fair, you really need more than one day.  So we rode a bunch of rides in the morning and early afternoon, hit up the water rides as the afternoon progressed, and before we knew it, it was time to head for home.  Since some schools were already in session and the fair was going on, attendance was down, so they were cutting some pretty good deals trying to encourage people to come out to the park.  Parking was free on Tuesday and you could have free fountain pop all day, too.  I think admission was reduced, as well, so that was also amazing.  We sure picked a great day to go to Adventureland!

But after three days of running around like crazy, we were all happy to be heading home, though I could have done without being wet for the hour and a half drive back.  That, however, is the price one pays for making the Raging River the last ride of the day.  Still, at least we didn’t go under the waterfall at the end like we did the first time around (we rode it twice, and Seymour went on the Log Ride twice in addition to the Raging River, so he was thoroughly soaked because he was in front on his second trip through the Log Ride).  Now that I think about it, it feels more like three months of running around like crazy.  And now that school is back in session, I wonder if it will get better or worse.  I guess we’ll find out.