As soon as I hit Publish on my last post, I realized that I’d intended to post some pictures along with it.  Guess that’s what happens when you get distracted. 🙂 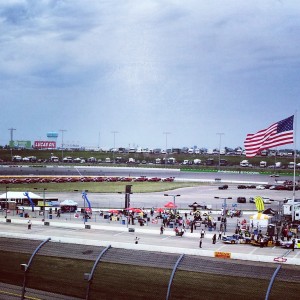 Qualifying laps. If you look under the flag, you’ll see a truck.

Anyway, since I seem to have skipped over my trip to the Iowa Speedway last month, allow me to share a bit.  That’s where Seymour’s at again tonight, this time with one of his old friends.  They’re at the US Cellular 250, one of the Nationwide Series races.  The race we went to was part of the Camping World Truck Series, but I can’t remember which one it was.  Anyway, Seymour had never been and I’d never been to a professional sporting event of any kind, so it was really neat to go to our first race together.

I had no idea who any of the drivers were because I don’t usually watch the truck races.  Heck, I don’t usually watch any of the races – I usually sleep through them, so going to one in person was considerably less comfortable than watching it from my couch.  Also louder.  I knew it was going to be loud, but I was surprised at just how loud it really was, even with hearing protection. 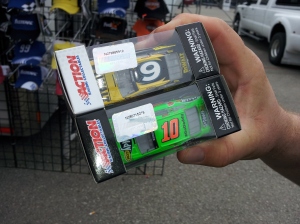 We bought Bubbles (9) and Tadpole (10) each a car. Oddly enough, the car numbers are also their ages. 🙂

We got there early in the afternoon for a driver autograph session, which was fun for Seymour.  I didn’t get a wristband – he got the last one – so I couldn’t go in, but since I didn’t know any of the drivers anyway, I wasn’t overly upset about it.  Our tickets also granted us entrance to the Fan Walk, which was a lot of fun.  They had games for prizes (including coupons for local restaurants and convenience stores, which was pretty cool) and you could get a close-up look at the cars as they were pushing them out onto the track.  It was pretty neat.

The race itself didn’t really grab my attention until about the last twenty laps.  I had trouble keeping track of everything (Ha!  Keeping track of things…I kill myself sometimes.  Seriously, though, that pun was totally unintended.  Really!) going on and found out just exactly how much I rely on instant replay (hint: it’s a lot).  It seemed like the drivers mostly just rode around the track till the end of the race and then started really racing each other.  But what do I know?  I told Seymour I’d go see a Nationwide race with him next year; maybe I’ll have more fun at that.

Either way, it was lovely to have a whole day to ourselves without the kids.  Many thanks are due to Seymour’s parents, who were kind enough to watch all of them for us while we were gone.  Date day for the win. 🙂

And now, because I’ve had this song stuck in my head since I titled this post, I’ll leave you with a little Sawyer Brown to get your Saturday evening off to a rockin’ good start (or to keep it going that way, I guess, since it’s 10:30 p.m.).