After my mom passed away, my dad used some of the life insurance money to replace our sidewalk (which really wasn’t sidewalk so much anymore as it was part of the yard) and to build a garage.  One day when I was eleven, my sister and I and the aforementioned best friend were riding our bikes around the newly-poured driveway and garage foundation (the garage had not yet been built).  One of the neighbor kids wandered over and wanted to play with us.  She and my sister were pretty good friends, even though my sister is four years older.  My sister has a talent for making friends – I think she was good friends with every kid in our neighborhood at one point or another. 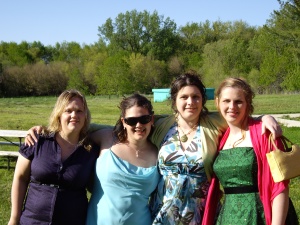 BFF, New Girl, Bride of Tomorrow!, and moi – aka Trouble, as we were known back in the day – at Tiny Neighbor Girl’s wedding
Photo courtesy of Kay Kauffman

This didn’t go over very well.  At all.  Lead balloons have been more successful.  As I recall, she refused to leave and we insisted she go home.  Finally, tears streaming down her face and her voice shaking, she screamed, “I’m gonna get my big sister and she’s gonna beat you up cuz she’s bigger than you and she’s older than you!” before she turned tail and ran for home.

The three of us looked at each other and laughed.  I’m pretty sure someone said, “Yeah, okay.”  I’m certain someone said, “What are you talking about?  You don’t have a sister!”  As far as we knew, she didn’t.  She lived with her parents and older brother down the street and around the corner from us (or, in the alternative, across our respective backyards because, let’s face it – even as kids, we were lazy and that way was faster).  But a few minutes later, smug and sniffling, Tiny Neighbor Girl returned, accompanied by a girl my age on a bike.

“What’s going on?” New Girl asked.  I explained the situation.  She turned to Tiny Neighbor Girl and said, “Sorry, Sis, there’s nothing I can do.  It’s their house.  If they don’t wanna play with you, they don’t have to.”

“Do you wanna play with us?” I asked New Girl.

Tiny Neighbor Girl went into orbit.  New Girl and I have been best friends ever since.

5 thoughts on “Old friends are the best!”