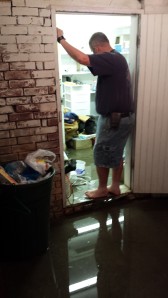 I went upstairs to put the boys to bed a little after 8:00 p.m. and the sky was dark.  Like middle-of-the-night dark.  Given that it’s been staying light till somewhere around 9:00 p.m. lately, this was odd.  But it had been raining, so I didn’t worry too much about it.  I had just started reading Fox in Socks when the emergency alert went off on my phone – a tornado warning had just been issued.  I hollered down to Seymour to find out what was going on and he said he’d check the radar, so I went back to reading.  A couple minutes later, Bubbles thundered up the stairs and said we were supposed to head down to the basement.

After yesterday’s monsoon, we woke up to find our basement submerged beneath three inches of water.  We managed to drain it eventually, thanks to our cousins – they came to Cricket’s birthday party this afternoon packing a pump.  The basement is once more flooded in places, but that’s fodder for another post.

I may even write it one day. 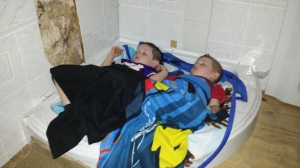 Anyway, the boys were happy to put off bedtime for a little bit, so they trooped down without a fuss.  Bubbles freaked out a little bit, especially when the power went out, but we soon calmed him down.  We made a little nest in the shower of our unfinished bathroom for the boys, then we set up a card table and chairs.  There’s nothing like a friendly game of Huckly Buck to keep your mind off the weather and what it is or isn’t doing. 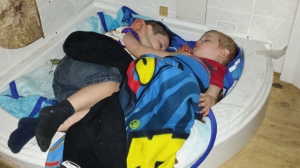 The boys are snoring away and have been for some time.  Seymour and Bubbles just lay down, too.  I can’t sleep, though.  I’m tired.  I’m wired.  I’m stressed to the max.

And I really have to pee.

Also, it’s surprisingly warm down here.  And with all the water we unwittingly funneled into our basement over the last two days, it’s also pretty stinking humid.  And stinking.  And I have to work tomorrow. 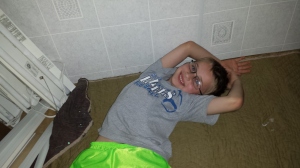 We really need to get our power back because my phone isn’t gonna make it till morning.  I’ll be lucky if it makes it till midnight.  I don’t remember the last time I got so many texts in such a short period of time, but it’s really killed my battery.  That, and trying to check the radar.

I wish I’d grabbed my purse.  I’ve considered running up for it (nature’s call is strong and persistent, much like Thumper), but I tend toward the coward’s school of thought, which says that you don’t leave the basement till you hear the all-clear.  Of course, we probably won’t hear it clear out here, but I’m a good little rule follower, and I hate it when Seymour runs up to check things out. 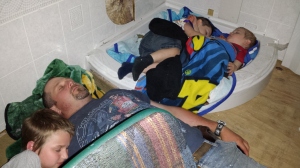 Well, that’s one problem sorted.  Now if only the power would come back on.

I wrote the above last night by flashlight as we hunkered down in our basement.  We spent a good two and a half hours down there, mostly without power, mostly calm.  Lots of prayer.  Lots of phone usage.

I don’t remember the last time my phone has blown up like that.  Between people texting me to see if we were okay and people calling Seymour to check in, it seemed like we were on our phones about half the time we were down there.  Naturally, we got a few weather reports: A tornado on the ground had gone through Traer (about fifteen miles east of us).  Another one had hit Morrison (about eight miles northeast of us).  Apparently there were two in Conrad last night (about ten miles west of us), plus one that went through Hubbard and New Providence in Hardin County, which is about half an hour away.

Today we had another round of storms.  I was watching the sky grow darker and darker as my coworker’s lunch hour passed and was somewhat startled when I looked over and noticed that the streetlights around the square had come on.  The picture on the right doesn’t show it very well, but it was reeeally dark outside.  The greenish tinge to the sky is pretty accurate, at least.

I was discussing the weather with some friends on Facebook and Twitter, watching the sky, and jumping with each crash of thunder.  I went to take a picture as it grew darker and momentarily mistook a patch of clover for a pile of hailstones.  Suffice it to say I was a bit unnerved.

And then the tornado sirens went off.  I grabbed my purse, my phone, my sweatshirt, and the tiny bit of nerve I had left and bolted for the basement.  I didn’t even bother to put the night ring on – anyone likely to call our office was probably also hiding in their basement.  My coworker burst through the door a couple minutes later; she’d just left to come back to work and was in her car when the the sirens went off.  By the time she arrived at work, she was in a full-on panic.  It took all my mommy skills to calm her down. 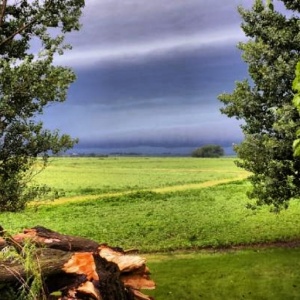 We’ve had more rain this afternoon, more storm warnings and watches, and there are rumors that the highway I take to get home is closed (though probably further south than I need to travel).  It’s pouring again, probably because I have to leave in five minutes, and I hate to think what I’m going to find in my basement when I get home.  We apparently lost 2.5 trees from our yard thanks to all the wind, and I can only hope they aren’t our apple trees.

Arrived at home to find the two trees we lost were already dead.  Now we don’t have to hire someone to remove them!  And we’ll have plenty of firewood…Of course, when I arrived home, I discovered that our power was out (again), which led to much wailing and gnashing of teeth.  It finally came back on about 8:40 p.m., and it stayed on all night, so that was good.

Now, to tend to the basement…